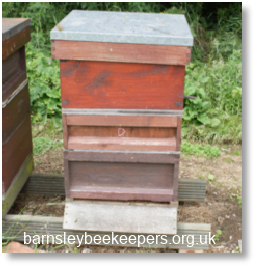 Historically, people collected honey from the wild. Wild hives in hollows in trees or hanging beneath over-hangs on cliff faces were cut away and the honey was eaten, honey comb and all. Early attempts to keep bees in an artificial hive largely made use of hives like the well know straw skep, but cut logs and earthenware pots were also commonly used as hives (and still are used in some parts of the world). These hives typically involved the destruction of the honey comb as the honey containing parts around the edge of the brood comb were cut away to extract the honey.

It wasn’t until 1853, when in America the Reverend L. L. Langstroth published his ideas for a new design of hive, that beekeeping entered the “modern era” .  Rev Langstroth studied bees closely and had noticed that bees build their wild comb with a specific distance between them (the bee space). He designed a hive with moveable frames set apart so that the bee space could be maintained. Furthermore, he separated the colony into a brood box in which the queen laid her eggs and a honey super into which the colony stored its excess honey.

His design revolutionised the world of beekeeping by giving beekeepers the ability to manipulate colonies by moving individual frames and by providing a separate place from which honey could be taken (with out damaging the brood area). A further advantage of the “Langsroth hive” is that it can be extended or reduced according to colony size and availability of nectar.

The Langstroth hive is one of he most commonly used hives in the world. Most other types of hive are based on this model of hive.

The basic structure of all these hives is essentially the same as the Langstroth but the dimensions and finer structure differ from one another. The diagram opposite shows the main parts of a typical (Langstroth-type) hive.

The main parts of the hive are the brood box (or brood chamber) along with the frames, floor, crown board and roof.

The hive roof is structured to keep the rain off the hive (bees survive cold weather very well, but becoming damp, particularly in winter, often finishes them off).

The brood box holds the brood frames where the colony,  in effect, lives. The queen lays her eggs here and 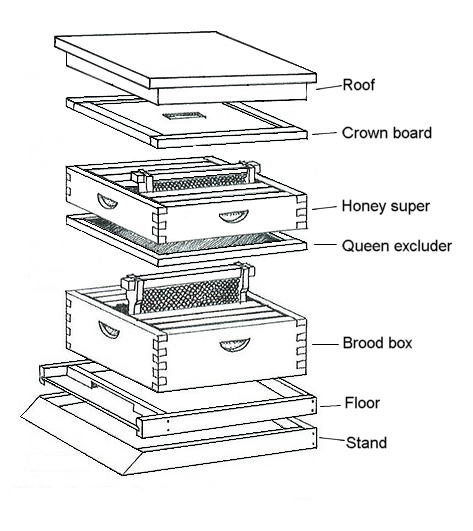 The frames - are needed to support the wax foundation from which the bees drawer the cells that make up the honey comb. The individual frames are either “deep” to  fit  the  larger  brood  box or “shallow” to fit  the smaller honey super. In order to maintain the “bee space” between the frames, spacers - which can be plastic metal or “built in” in the case of Hoffman frames - are used.

The crown board is important for containing the colony in the brood box and preventing the colony from building wild comb in the roof void.

The floor completes the main section of the hive. This can either be solid or contain a mesh base (important for managing Varroa mite. Typically the wide entrance of the floor will accommodate an entrance block that restricts the entrance to something more easily defended by the bees.