To be a successful beekeeper, it is important to do the right things at the right time. Honey bees are wild creatures and they respond to seasons and the flora around them. We have to keep up with the bees and not the other way round. Knowing what to do and when will help the beekeeper maximise honey yields and maintain healthy colonies. 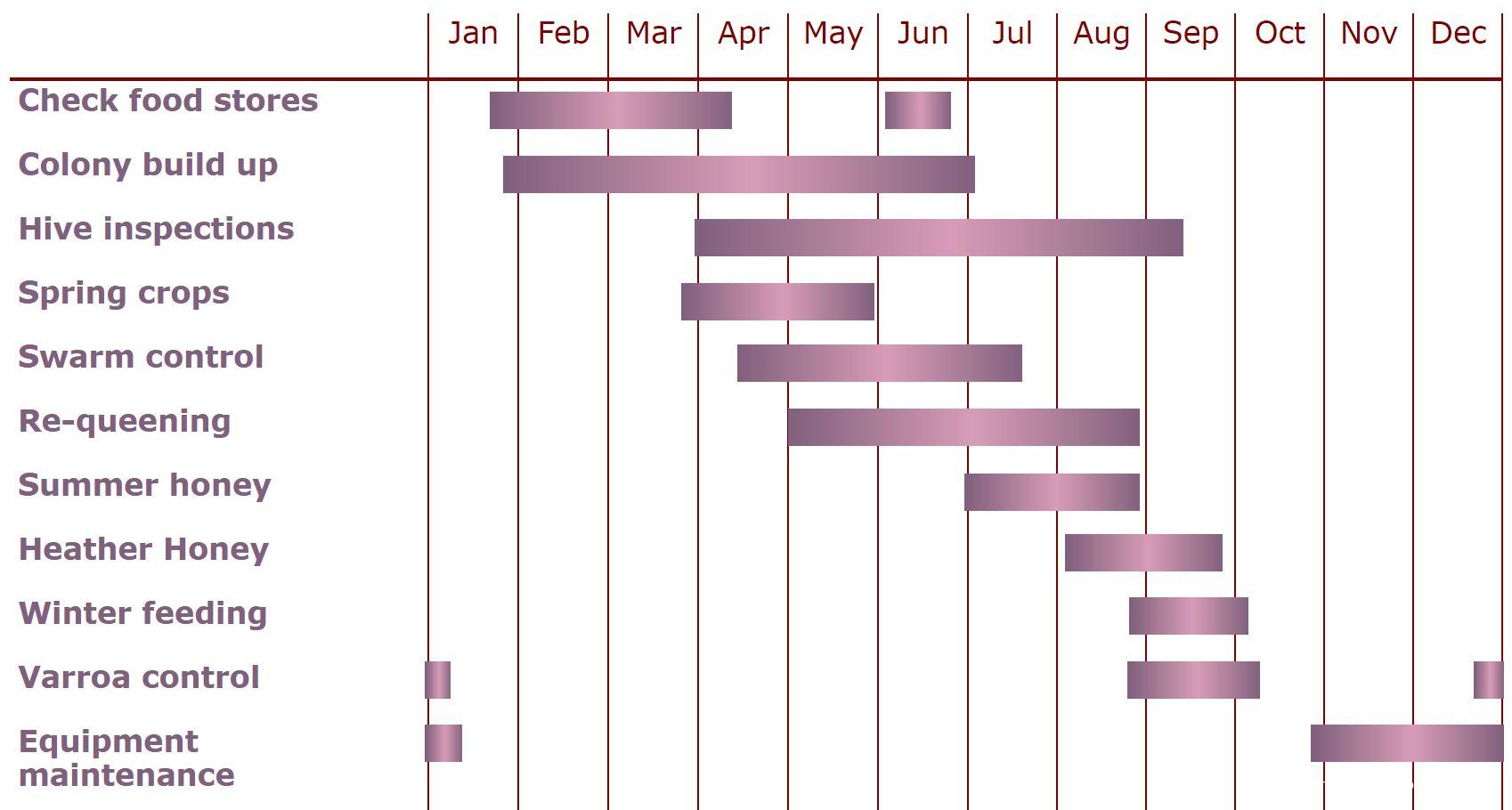 Hopefully the bees will have gone into the winter with enough stores of food to see them right the way through to spring. However, the bees will be running short as they approach late winter and early spring and a spell of poor weather may cause the colony to die if it cannot fly and find food at this crucial time. Therefore, beekeepers should check their hives - by hefting (lifting from one side) their hives -for the weight of food stores and feed sugar syrup or fondant if the weight of the hive is too low. The beekeeper should only do this to get the weight up enough to cover the early stages of colony growth. By the time we get into April, the bees should be well under way with colony growth and foraging for food.

The Queen tends to stop laying eggs for a while during the winter (typically during December and January, albeit she can continue to lay eggs throughout the winter in some cases). As the day length become longer in late winter/early spring the Queen will begin to lay eggs and the colony rear new brood. As forage (nectar and pollen) becomes more readily available with early spring flowers, egg laying by the queen will increase sharply. The colony will continue to increase throughout spring and into summer, going from something like 5,000 bees in winter to 40-50,000 bees by mid summer.

As soon as the weather warms up in early spring the beekeeper should begin inspections. Ideally we should be looking to do this on days that reach at least 15 C and with no significant wind. It is often said “if its too cold to work in a shirt with your sleeves rolled up, then its too cold for inspecting colonies”. In full sun and no wind, it might be suitable for very brief inspections at lower temperatures, but the beekeeper should be careful not to chill the brood as this may kill the brood and set the colony back.

Early inspections should be concerned with looking at the health of the colony. Is there is a laying queen (a consistent pattern of eggs should be seen)? Do the larvae look healthy (pearly white and in a nice “C” shape)? Are there sufficient stores to maintain the colony? The presence of a good, consistent pattern of eggs in the central parts of the frames will indicate the presence of a laying queen. In this case it is not necessary to find the queen however, it is a good time to mark the queen (if required), as the relatively small number of bees makes her easier to find later on.

If no eggs are present then the colony might be “queenless”. In which case the colony will need a new queen or require uniting with a “queenright” colony. If eggs are present, but in a patchy pattern, appearing at irregular places on the combs, there is probably a problem with the queen . She might be infertile and drone laying or unhealthy in some way. In some cases, worker bees may lay drone eggs. Whatever the reason, it is probable that the colony needs re-queening or uniting with another queenright colony. Buying a new queen from a breeder won’t be an option until at least May.

As the season progresses hive inspections will be concerned with maintaining colony health, managing brood levels and swarm management.

Where bees have access to spring crops such as borage and rape seed, significant spring honey harvests can be achieved. For many beekeepers these spring harvests will be their main periods of honey production. Unless the colonies are already in close vicinity to such crops, beekeepers intending to benefit from spring honey will have to plan ahead - seeking out farms where suitable crops are to be grown and seeking permission from land owners to locate hives in suitable positions.

The beekeeper with access to such spring crops will have to plan for an early honey harvest. Rape honey may need to be taken off before it is capped so that exatraction can happen straight away. A refractometer will help with establishing whether or not honey is ready to be harvested.

Any time from early/mid April to mid or late July, bees can swarm. This is a natural habit of bees used to increase colony numbers.

When the colony becomes overcrowded with bees the colony begins to raise one or more of the newly hatch eggs as queens. When the new queen is sealed over in her cell, the existing queen flies off with up to half the colony. This may stop the production of additional new queens and the successor queen emerges from her cell to take over the old colony. However, some colonies have a strong swarming tendency and can produce several new queens with all but one leaving the hive with a “cast” of bees. This can leave the colony severely depleted of bees.

The swarming instinct of bees is useful to beekeepers when wanting to divide colonies to increase numbers. However, it is also a problem for many as a lost swarm equals a reduction in honey production. Therefore, many of the spring and summer inspections are aimed at swarm management.

Queen honey bees can live up to 6 years. However, this is rare as poor performing queens are naturally superceded by new queens. The beekeeper normally expects a queen to lay eggs at a high rate for 2 seasons. Therefore in season 2, plans should be made to replace queens at the end of their second season. This is often done at the end of summer or early autumn. This gives a chance for a re-queened colony to raise sufficient new bees before winter. However, some beekeepers may wait until spring to replace older queens.

Plans begin in spring where suitable nuclei are made by taking a frame with a queen cell and placing this in a nucleus box along with 2 or 3 frames of sealed brood from one or more hives. The nucleus can then be made up with comb containing fresh foundation until complete. The new queen can be monitored easily for her egg laying ability (and other qualities such as temper) in the nucleus box. At the end of the season older queens can be replaced with the new queens.

After the initial flush of spring flowers and any spring crops,  we tend to see a bit of a lull in available forage. Then later in June the summer flowers begin to open. For some, summer won’t bring much of a honey crop, whilst for other clover and garden flowers are bountiful. Assuming the latter, summer honey will build up and need removing during August.

A particular crop of honey that can be gained over a short period of time in the late summer is heather honey. In a good year, large colonies can lay down considerable amounts from heather. In a similar way to spring crops. The beekeeper needs to plan ahead with finding suitable locations and gaining permission to locate hives.

Heather honey is often of higher value than other types of honey.

The taking and bottling of honey can take place at various stages in the year depending on which crops the bees have been working. This can follow the spring crops, but for many honey will be removed and bottled in the late summer (or early autumn for heather honey).

Most beekeepers will require a spinner to remove honey from super frames (although honey comb can be pressed). This honey will have to be strained to remove bits. Some will bottle their honey after a period of settling whilst others filter their honey prior to bottling. Production techniques vary from one beekeeper to the next.

At the end of the summer it is important to ensure that the bees have enough stores to see them through the winter. Experienced beekeepers will be able to “heft” their hives (lift them up on one side) and judge how much food there is in a hive. Over time you get to know when a hive feels nicely heavy. Ideally a colony should have placed honey and pollen in the frames right up to the outer frames in the hive. This target weight of food in the colony is around 40 lb or 18 Kg.

Throughout the season the bees use the brood body of the hive to produce new brood and lay down excess stores in the honey supers. The beekeeper then comes along and removes the supers and most of the excess stores. If this is done early enough, the colony may have sufficient time to lay down enough winter stores in the brood body before the weather turns cold. However, if honey is removed late or the weather turns too early, the bees may need a little help.

Sugar syrup is used to artificially feed bees. Various types of feeder are used to give syrup to colonies. Typically syrup is made up with equal parts of water and white sugar (never use brown or unrefined sugar as it contains toxins that can kill bees). If feeding is left till late in the season (i.e. mid to late September) a more concentrated syrup should be made up which will allow the bees to process the syrup faster. In some years bees don’t need much topping up whilst in others feeding syrup can almost seem endless. Keep feeding until the hive feels sufficiently heavy.

Late summer and early autumn are a good time to treat colonies for varroa mite. It is important to treat colonies when there is no honey (intended for human consumption) in the hive. There are various types of treatment available to the beekeeper; some in the form of proprietary products and others made up by beekeepers. Unless a colony is known to be free of varroa (a rarity these days), the beekeeper should aim to sufficiently reduce mite levels going into the winter. If mite levels remain high going into the winter, it is quite likely that the colony will fail during the winter or early in spring.

The “quiet period” of the winter months is an ideal time for the beekeeper to carry out building and maintenance of spare hives and hive parts.