Looking for help with a swarm that you have seen? CLICK HERE

Swarming is a natural process that enables honey bees to increase numbers and colonise new areas away from the original colony. Honey bee colonies will begin preparing to raise new queens and swarm any time between mid-April to mid-June, albeit swarming can take place during July and August in certain conditions. On this page, we look at how we can delay or deter the inevitable.

The Nature of Swarming 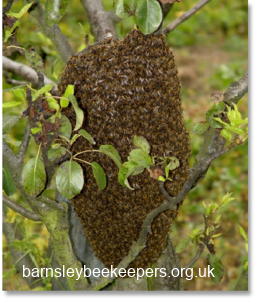 The colony will begin to make swarm preparations as soon as there are enough bees in the colony and there is enough food availability to support expansion. Bees communicate within the hive using pheromones, touch and vibrations passed through the wax comb. Above a particular threshold of bee numbers and density, the colony becomes congested and the dynamics of these communications change to an extent which causes the bees to prepare to make queen cells. An ageing or failing queen may also cause the colony to make new queen cells.

At the sides, lower edges or at breaks in the wax comb, the colony will make a number of early stage queen cells or queen cups. These queen cups, which resemble small acorn cups, will become fully drawn queen cells when the time is right.

The incumbent queen may lay eggs in available queen cups, yet it is the workers that dictate when to raise new queens. If the colony is not ready, the workers will remove the eggs. Once there are enough bees present and when urged on by readily available forage, the workers will draw out the walls of the queen cups to form partially drawn queen cells. The queen will lay in these.

At this point the workers will “slim down” the queen by feeding her a diet deficient in protein.This will put her egg laying on hold and cause her abdomen to shrink, preparing her for flight. Anytime from around 6 to 9 days (the first queen cell is sealed on day 8) from when the first egg (in a queen cell) was laid, the incumbent queen will be ushered out of the hive and will fly off with anything from 30 to 50% of the colony. If the weather turns particularly poor when they are due to swarm, the colony may hold back for a few days or so until there is the briefest of gaps in the poor weather.

The remaining colony may have anything from a few to 20 or more queen cells, each due to emerge 16 days after the egg was laid. Once the first (prime) swarm has left the colony, if there are still plenty of bees remaining, the next queen to emerge will leave with a secondary swarm or cast. This will continue with subsequent queens until there is either only one queen left, or the remaining colony becomes too depleted and stops swarming. If more than one queen still exists once the colony has stopped swarming, a newly emerged queen will kill other queens still in their cells or, if more than one has already emerged, fight until only one survives.

It must always be remembered that swarming is a natural process that the bees have as part of their perennial cycle. At some time or another, a hive of bees will attempt to swarm. Therefore, it is quite natural for anyone to want to prevent the loss of swarms.

So, given that the bees will swarm at some stage, can swarming be deterred or prevented?

To try and prevent swarming outright is not recommended as it works against the natural processes of the bees. One suggested deterrent to swarming has been to remove queen cells until the bees stop making any more. Unfortunately, it is still sometimes taught that the first queen cells to appear should be culled in the hope the bees will give up their swarming tendency. This has now been shown to be counterproductive. Some beekeepers who have tried this have reported that the bees become “demoralised”. By this they mean that the brood development drops and the bees’ foraging activities drop causing a general weakening and reduction in colony size.

Modern bee keeping practice is to go with nature and either let the bees swarm (and rely on catching those swarms) or to mimic swarming in a way that artificially swarms the colony in a manner controlled by the beekeeper. Most beekeepers opt to manage swarming by mimicking the natural process as it enables the beekeeper to maintain larger, more profitable honey producing colonies or allows the beekeeper to increase the number of colonies they have.

Can swarming be delayed?

Being a natural process, swarming is somewhat inevitable and will happen at some time or another. Being prepared is the key to managing and controlling the swarming process. However, where the beekeeper is not ready to manage swarming (maybe due to lack of time, not having equipment ready, holiday or work commitments), it is possible to delay swarming - to a point! Available techniques largely revolve around providing adequate space, queen clipping or one of the more advanced swarm prevention methods such as raising nucleus colonies and demareering.

Delaying swarming is largely done by providing more space. The colony will have developed significantly during March and may well be preparing to swarm by mid-April. At this stage, the beekeeper should be looking to ensure that the colony has plenty of space for egg laying and rearing brood. The following methods allow simple route to providing  extra space:

Not strictly swarm prevention, but one method of buying more time when there is a high risk of swarming is to clip the Queen. By this we mean that the queen’s wings are cut short thus hindering any flight.

Clipping the queen’s wings will not prevent the bees from attempting to swarm but will provide an extra week between inspections. Albeit, if the bees do swarm the queen will inevitably be lost. Clipping the queen’s wings might be useful to the beekeeper who may not always be around to manage swarm prevention or control on a timely basis. Work commitments for instance may prevent the beekeeper from inspecting a hive before any newly developed queen cell is capped.

It typically takes 8 days (from the time an egg is laid in a queen cell) before a queen cell is capped - the trigger for a swarm - and the bees might have begun raising a new queen immediately after the last inspection. Therefore, during the “swarming season” we would expect to visit our hives once every 7 days. If the bees attempt to swarm because an inspection hasn’t been performed on time, the “old” queen will fall to the ground and be lost. The rest of the swarm will then return to the hive. From the previous inspection, the bees might have raised new queen cells, potentially allowing 16 days before any new queens, and hence swarms, emerge. Therefore, the beekeeper has around 14 days between inspections without the risk of losing a swarm.

Clipping the wings of a queen is quite a delicate operation. Experienced beekeepers will, using an un-gloved hand, follow the queen around and pick her up from behind by the wings. She is then transferred to the other un-gloved hand where her thorax is carefully held between thumb and finger. Taking great care not to cut off an erroneous leg, the beekeeper uses a pair of fine, sharp scissors to cut across the wings ends, removing around one third of the wings. The queen is surprisingly robust and will generally not suffer any injury from being held gently between thumb and finger, but gloves should not be used as too much pressure might be applied. She can be quite a slippery character and can easily wriggle free, so applying the right amount of grip is something that has to be learned through experience. Practicing on drones may be an advantage.

Wing clipping can also be achieved by holding the queen in place with a marking cage. This is typically more time consuming but is useful when the bees are a little feisty. Chasing the queen around on the comb in order to pick her up by the wings can upset the surrounding bees leading to an un-gloved hand receiving a sting or 3. By carefully holding her in place with a marking cage and allowing her slight movement, her wings will often pop through the mesh allowing a easy cut to be made. Fine precision scissors (look a bit like tweezers) are the easiest tool for this.

In addition to these measures the beekeeper can manipulate the hive by either removing bees to make up new colonies or temporarily depleting the numbers to make the bees act as if they had swarmed. Such methods include: