If there is one aspect of keeping bees which is like a dark art to beginners (and quite a few seasoned beekeepers) it’s swarm control. There are numerous methods of swarm control (as opposed to swarm prevention) in common usage, each beekeeper tailoring their preferred method to suit. No one method is wrong or right and the method or variation used in down to personal preference. On this page we shall attempt to provide an overview on the main methods in use. 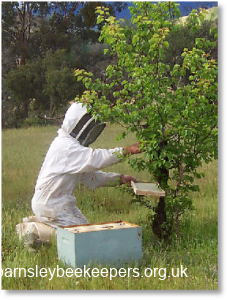 The basis of most forms of swarm control is artificial swarming.

The list of different methods of artificial swarming in use is almost endless. It is probably this factor which makes swarm control so perplexing to all but experienced beekeepers. However, all forms of artificial swarming share the same common principle of separating the eggs and brood from the queen and understanding how this basic principle works helps in all methods.

In a natural swarm, the colony begins to raise one or more queen cells. The queen’s attendant workers will slim her her down by feeding her a diet less rich in protein (causing her egg production to stop). At around the time the first of these queen cells is capped over, swarming begins with numerous bees (workers and drones) exiting the hive and massing around the entrance. The queen is ushered to the entrance and takes to the air with thousands of bees flying around trying to follow her scent and the scent of the bees immediately around her. The swarm alights somewhere nearby and stays there while scouts find a new home. Left behind is a colony heavily depleted in numbers and with developing queens (some of which may leave with further swarms).

Artificially swarming the bees mimics the main elements of the natural process whilst retaining control over how the colony reproduces.

Regardless of the method employed in swarm prevention, the majority of hives will swarm at some time or another. It’s a natural process triggered by colony expansion and external stimuli including food availability.

The keys to successful swarm control largely revolve around good forward planning and having a clear understanding of the colony life cycle.

Signs of Swarming - Before a hive can be artificially swarmed, the colony must be ready to swarm. That is, there must be visible signs of swarm preparation. The colony will have at least 8 frames of brood and there will be a large number of adult bees. New queens are raised in queen cells. These start out as queen cups (resembling small acorn cups) and will often be built at the edges of frames or on the lower edges of wholes or deformities in the wax comb. Queen cups are typically orientated downwards. When the colony is ready to swarm the queen will lay eggs in these and the workers will begin to draw out the sides. A well drawn, elongated queen cell with a well developed larva is a sure sign of imminent swarming. The time of year should be right - between April and July. Further investigation is needed outside the main season as any queen cells may be supercedure cells or even emergency cells if the queen has been lost.

Marked queen - In the first instance before any artificial swarming can take place, it is essential to be able find the queen. Therefore marking the queen early in the season will make her easier to find.

What if the queen can’t be found when needed due to there being too many bees? Have prepared a second hive with foundation. Place the existing brood box (with floor and crown board) to one side a few metres away and place the empty hive on the old site. Place any supers back on the empty brood box on the old site. Leave alone for half an hour for the flying bees to return to the old site, thus depleting the brood box with the queen. She will hopefully be easier to find. Use a marking cage to secure her on a frame, before continuing with your manipulations.

Additional equipment - Most methods of swarm control involve using additional hives or hive components. Plan what method you intend to use and prepare the necessary equipment  in advance of the swarming period.

Lifecycle - Understand the lifecycle of the queen bee. Knowing that it takes 8 days from egg to capped cell and a further 8 days for a queen to emerge helps with timings. For example, operating within the initial 8 days (i.e. 7 days between inspections) will allow queen cells to be found before swarming.

Each method requires additional equipment in the form of additional brood boxes, or whole hives or even special manipulation boards. There are only a few core methods of artificially swarming colonies, yet there are dozens of hybrids and variations that have been developed over time. Each beekeeper tends to favour a particular method or variation (probably the one they were taught by a more senior beekeeper) and then goes on to adapt it in some way. There have been many articles on the beekeeping media which present many weird and wonderful methods of swarm control, some of which are ridiculously complicated. It is best to start with the most simple version of any one method and then, if desired, to develop one’s own variations.

Each of the main methods involves separating the queen from the eggs and brood. Rather than the artificial swarm (the queen and flying bees) finding an entirely new location like with a natural swarm, the  artificial swarm stays put on the old site. The brood and nurse bees, which would otherwise stay put in a natural swarm, undergo the moving. Some methods involve the complete separation of the two elements (swarm and brood) whilst others keep the two together within the same hive.

We shall not attempt to provide details about the myriad of methods in current use, but will instead concentrate on 3 of the original and best known methods and which happen to form the basis of most modern methods in use. These are: